Note: Some links in this post are affiliate links, which means I receive a commission if you make a purchase. Affiliate relationships include, but are not limited to, Bluehost, Amazon Associates, and StudioPress.
Pin102
Share182
Tweet
Email
284 Shares

The toy situation in our home is getting out of control.

Four months ago, I started slowly getting rid of my kids’ toys. By Christmas, they will all be gone.

And my kids are cool with it.

A few years ago, they played in the playroom all the time. Back then I only had a toddler and a baby. I had to keep them contained in a small play area because I needed to keep an eye on the baby (to make sure she didn’t put any small items in her mouth), and I needed my toddler to stay nearby so she didn’t do anything dangerous out of my eyesight. We spent a lot of time in the playroom, laying with puzzles, the bouncy horse, reading books, dancing around, and coloring.

As we added another baby to the mix, I didn’t have as much time to spend playing with them, and the playroom slowly became the room where we stored toys instead of a place to play with them. Our activities eventually moved out into the living room and kitchen table so I could keep an eye on all three kids at all times even if I was cooking, cleaning, or changing diapers.

Fast forward 2.5 years after my third child entered the picture, and the playroom is now this dungeon of scattered toys that get thrown in there during my nightly clean up process. And because I’m not the best at purging toys periodically and don’t have the patience to nicely re-assemble their toys as I pick them up, there’s a huge mess of mismatched & incomplete puzzles and random parts to toys laying everywhere.

I read the blog post, Why I Took My Kids Toys Away (and why they won’t get them back) by Ruth Soukup of Living Well Spending Less last year, and I have to admit, at the time I thought she was nuts. She shared that she took every last one of her children’s toys away and wasn’t planning on giving them back.

Even though I thought she was crazy, I kept thinking about her post every time our toy situation started getting to me.

Now that my kids are 2, 4, and 6 years old, I completely understand. Not having these toys would take so much stress out of our lives.

I am not one to go full throttle into a shocking change like this. I don’t like change and like to understand why I need to change something before I will accept it, and my kids are part me, so I feel like I should prepare them before going toy-less.

So this summer I started explaining to the kids that we were so fortunate to have lots of toys and a nice house to live in (which they are used to hearing quite often any time I hear whining when someone doesn’t get exactly what they want), and that we needed to start sharing our toys with kids who are less fortunate.

Every few weeks, we went through the toys with the goal of giving away one or two paper grocery bags worth of items each time. We would fill up the bags and take them straight to Goodwill or our favorite local shop that takes donations and gives money to our town’s schools.

It was as hard for me as it was for them. I have a tendency to hold on to everything (not quite hoarding, but definitely unnecessary attachments to things or the idea that I might need it some day).

After a few rounds of this, we started to get the hang of it. They became really proficient at making decisions on which toys they loved and which ones they wouldn’t even miss the second they left our house. And I found that if I took each filled bag straight to the car after we cleaned, I no longer found myself holding onto bags of stuff in the garage because I had second thoughts.

I’d say we are 75% of the way through the toy purge. I can already feel our cleaning burden lightening up quite a bit. Miraculously, though, they are still somehow able to trash the playroom with the toys they have left. So I know we have some work to do.

Together we have identified a few select categories of toys they would like to keep and that I’m okay with them keeping.

Toys That We Got Rid Of

Gone are ALL the puzzles with missing pieces. I’d say we had 20 puzzles of all kinds. Now we are left with 4. Three toddler puzzles and one princess puzzle. They are neatly stacked on a shelf now.

On its way out is the TRAIN TABLE. Being the sentimental person I am, I bought my oldest a train table when she was 4 because she said she wanted one and it was a good deal on Craigslist. And also because I knew I was pregnant with a boy who, according to all my mom friends with boys, would want a train table sooner than I thought. It never occurred to me that it’s not a general rule that ALL BOYS MUST HAVE A TRAIN TABLE and until he was ready to play with it, that it would be a jumping platform or toy storage countertop. That thing has caused me so much heartache…I am so ready for it to be gone! I’m listing it on my local Facebook buy/sell/trade page this weekend.

Extra stuffed animals. Once I surveyed our storage capacity, I realized that we could only afford to devote one storage drawer to stuffed animals. After surveying the stuffed animal landscape, I realized we had over double what we could easily store, so I held similar stuffed animals up two by two and asked them to choose one over the other. Then I picked a couple I didn’t really care for and didn’t think they’d actually miss. We were able to pare the selection down to a few really important ones with sentimental meaning. It’s actually nice to be able to give them a proper home and featured status in the toy room.

Broken crayons. Two sets of building blocks. Coloring books that were over half used. Books nobody would ever get around to reading because we have too many AND go to the library every week. A bouncy zebra. A Little Tykes parking garage. Old craft supplies. Those are all gone, too.

In addition to the 4 puzzles and a few stuffed animals, we kept a handful of coloring books and preschool/elementary school activity worksheet books, art & craft supplies (including paint, stamps, brushes, PlayDoh cutters & tools), Mr. Potato Head, a few balls and one set of blocks, dress up clothes, a dump truck, a battery-operated monster truck, a jump rope, and matchbox cars.

We are currently organizing those items into distinct storage areas, and I’m working with the kids on putting one toy or activity away before getting out another. With some many toys everywhere all the time, it seem like an exercise in futility to try to enforce a rule like that. Now that we have so few things to play with, it’s easier to implement.

I was really pleasantly surprised at how well my 6-year-old took the news that we were getting rid of most of our toys. She objected for a few seconds, but then she thought about it and realized she never really plays with anything but craft supplies, so she was like, “eh, whatever.”

My 2-year-old doesn’t really know what’s going on. He just plays with whatever is available. Which means now he plays with his monster truck and balls mostly. But he hasn’t once asked for something we got rid of.

My 4-year-old has had the toughest time with the change. She was super stressed at first about giving away all her toys. But I took time to explain to her my vision for the playroom – a new arts & crafts table in the corner set up with all her crayons, paper, scissors, and paint plus a ton of floor space to spread out and play dress up with her sister and any friends they invite over. After I did that (playing it up to the best of my ability), she came around and actually got excited about her new craft area. She asks me every day if I’m ready to put it together. I’m just waiting on us to complete the transformation because I want it to be a clear change from one way of doing things to another. Plus, I need time to find a table at a rock bottom price at a yard sale or thrift store. 🙂

Taking their toys away has changed the way they play. Whereas they used to play with ton of different toys all day long, now they have to use their imaginations due to the limited to options. Just yesterday I saw my younger two tucking hand towels into the shirts to transform into “superheroes,” and even more so than usual, they are interested in playing outside in the dirt and just running around or riding around the back porch.

This has been a life-changing journey in our home, and I can’t wait to see what happens once we’re completely done with the purging process. My only regret is that I didn’t do this sooner!

Follow me
Lena Gott
I'm a CPA turned SAHM of 3 little ones ages 4, 6, and 9. I'm a mommy by day, blogger by night. Join me as I write about fun kids activities, family finances, and losing 50 lbs after baby #3.
Follow me
Latest posts by Lena Gott (see all)
Pin102
Share182
Tweet
Email
284 Shares 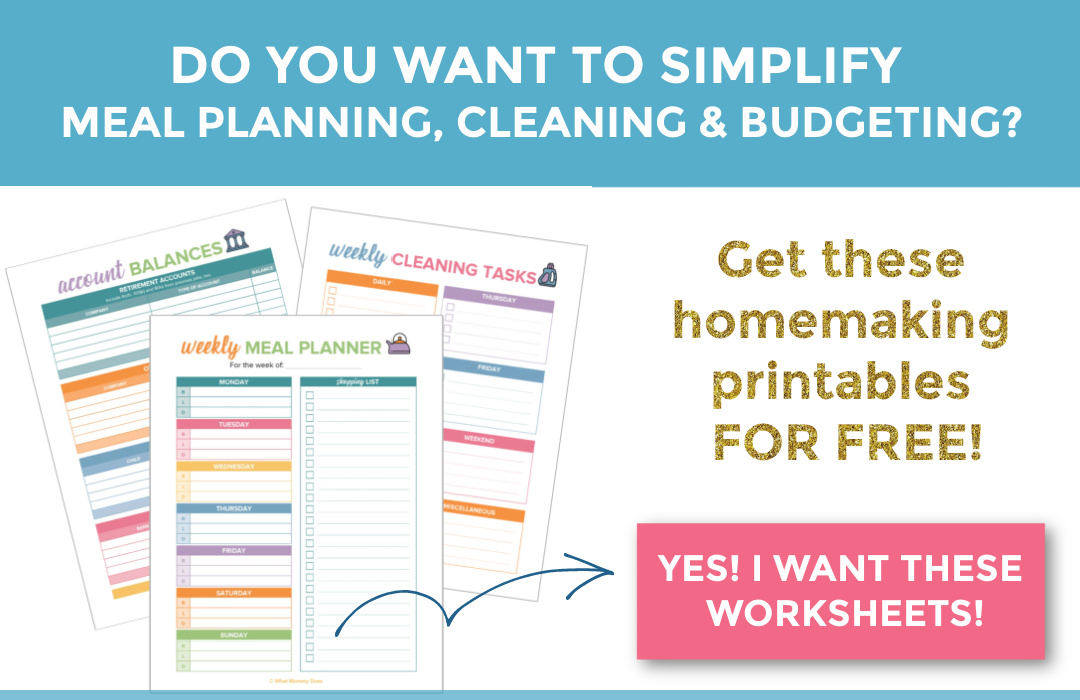 Does anyone have a kid who goes to a school where there are bake sales as a fundraiser? Cue every mom in America tossing their hands up! After years of bake sale guilt where I spent hours trying to perfect cookie recipes to send to school, I finally had an epiphany: You can charge way END_OF_DOCUMENT_TOKEN_TO_BE_REPLACED

Every year I try to find a neat way to gift money to the kids in my life who prefer receiving cash instead of an actual gift. It may seem rude to some, but I don’t think it is! What is inappropriate or tacky about giving someone exactly what they want and need the END_OF_DOCUMENT_TOKEN_TO_BE_REPLACED

It’s that time of year again; the excitement is in the air, holiday music is playing everywhere, and you’re looking for some meaningful, free Christmas gift ideas (because let’s face it, every penny counts when you’re broke). Don’t allow yourself to fall into the trap of thinking that you can’t celebrate the holiday or END_OF_DOCUMENT_TOKEN_TO_BE_REPLACED

I know there is a lot of festive decor and fun things about the holiday season, but can I share a small, guilty pleasure I have with you? I LOVE Christmas scented hand soap…LOL! Seriously, the Christmas scents just put me in a good mood, and I have been known to buy several hand END_OF_DOCUMENT_TOKEN_TO_BE_REPLACED